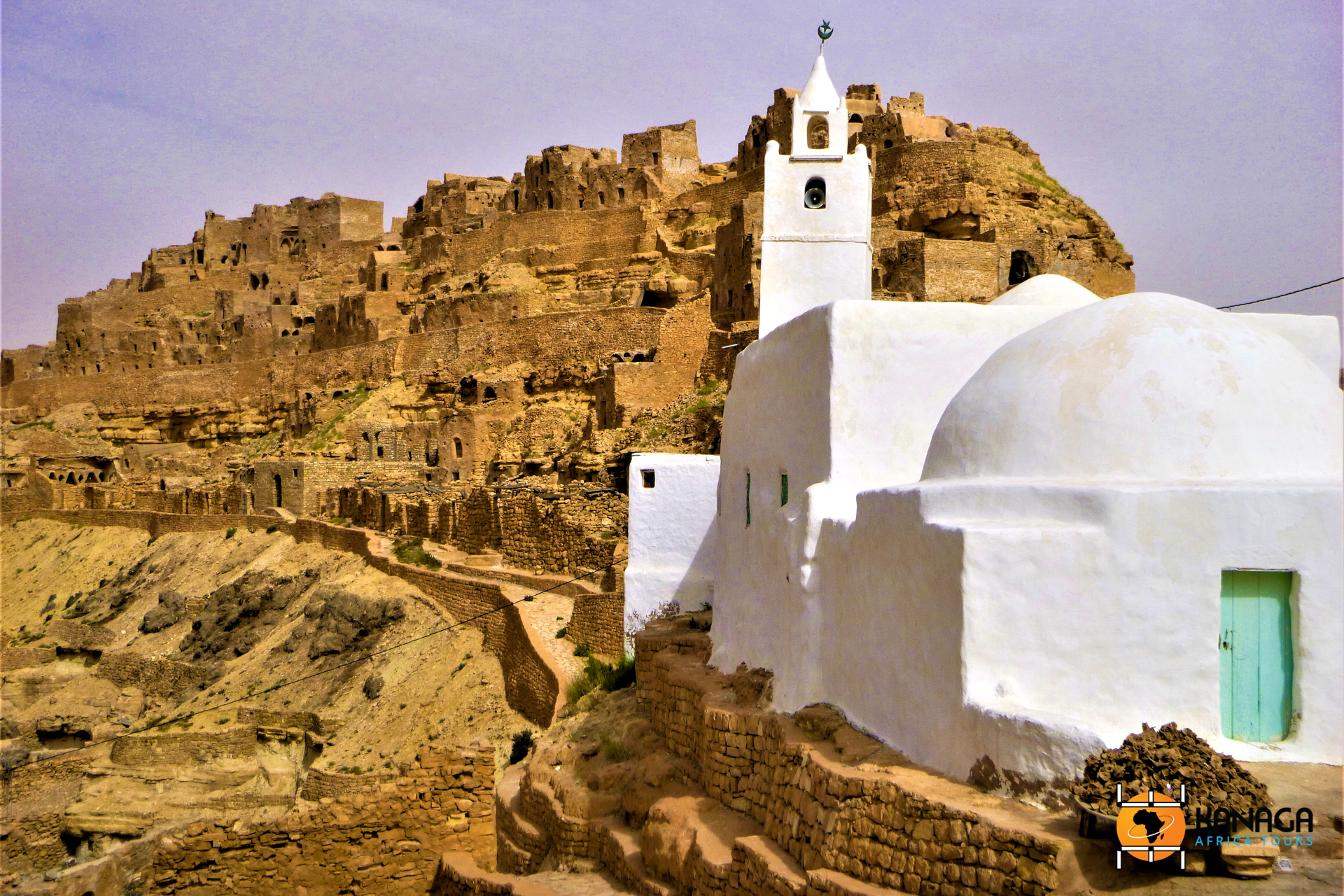 The austere region of south-east Tunisia, with its vast stony plains opening onto scenic landscapes of mountains, desert plateaus, crags and rocky ridges, is where, more than anywhere else, man‘s adaptation to the complex environmental conditions is evident. And it is here that some of the most astonishing sites in Tunisia can be found.

Matmata is a place with a surreal charm. At first glance, it is a plain of bare earth dotted with the occasional palm tree. But a closer look reveals several craters carved into the soft rock. These are the so-called troglodyte houses, underground dwellings designed according to the classic layout of Tunisian houses, with a large central courtyard overlooked by the entrances to the various rooms, arranged on two levels. The peculiarity lies in the fact that the living area is entirely excavated in the rock, around a courtyard up to 10 metres deep, with a diameter of about 7 metres, which is accessed from above by a staircase.

This particular choice of construction seems to have had a defensive purpose, to protect against enemy raids, but more likely it was due to the need to protect oneself from the torrid climate of these areas. In fact, the temperature of the rooms, which are large and comfortable, remains around 17 degrees all year round. The family activities take place there and Berber traditions are kept alive, such as weaving, which occupies an important place, with multicoloured hand-knotted carpets used to cover and insulate the floor and walls of the rooms.

In addition to troglodyte dwellings, the far south of Tunisia is known for the surprising architecture of the Ksur, fortified collective granaries, also known as “castles in the desert”, due to their unique structure. Once connection points for the semi-nomadic populations of the desert, the Ksur were used to store crops in stacked storage cells (the Ghorfas), protected from pillaging by enemies.

One of the most spectacular Ksar (singular of Ksur) in the region is located in Chenini, a ruined but still partly inhabited village, built on top of a steep hill and dominated by a white mosque that contrasts with the yellow ochre uniformity of the buildings and the surrounding landscape.

The origins of the village date back to the 12th century, when the Berbers took refuge in these lands to escape the invasion of the men of Caliph Fatmide al-Mustansir. The construction of the Mosque of the Seven Sleepers also dates back to that time. It takes its name from a curious legend according to which seven saints the size of giants are buried in tombs more than 5 metres long.

On the verge of being listed as a UNESCO World Heritage site, Chenini is a must for visitors of the region and is one of Islam’s sacred destinations, as the shape of the hill on which it was built resembles that of a crouching dromedary with its head turned towards Mecca.

Along the road to Remada, towards the border with Libya, is Ksar Ouled Soltane, a beautiful example of a fortified Ksar, made up of Ghorfas stacked up to three or four storeys high, connected by simple clay stairs, in a warm colour scheme that is striking in its harmony.

The Ghorfas, which in ancient times stored olive oil, barley and wheat and served as banks for the local population, all face a large central clearing, while the rear part forms the walls, protecting the granary itself.

This building is repeated, similar but always different, in other areas of the region, with a multiplicity of Ksours that can be visited on an excursion to discover Berber traditions and culture, including Douiret, Medenine, Ksar Ezzaha and Ksar Haddada, which in the past inspired director George Lucas for the Star Wars saga.